With Justice League of America being delayed by 2 weeks and Arrow still on its couple week hiatus, we've got a fairly slow week for the Battling Bowman.

Don't worry though, you can still get your Green Arrow fix this week with a new entry in the digital-first Arrow comic. Issue 28 hits the digital stores today and it looks to be another Diggle centric story. Check the solicitation and preview below.

If you're behind on your Arrow viewing, you can also catch a rerun of the episode "Dead to Rights" tonight on the CW before next week's all-new episode! 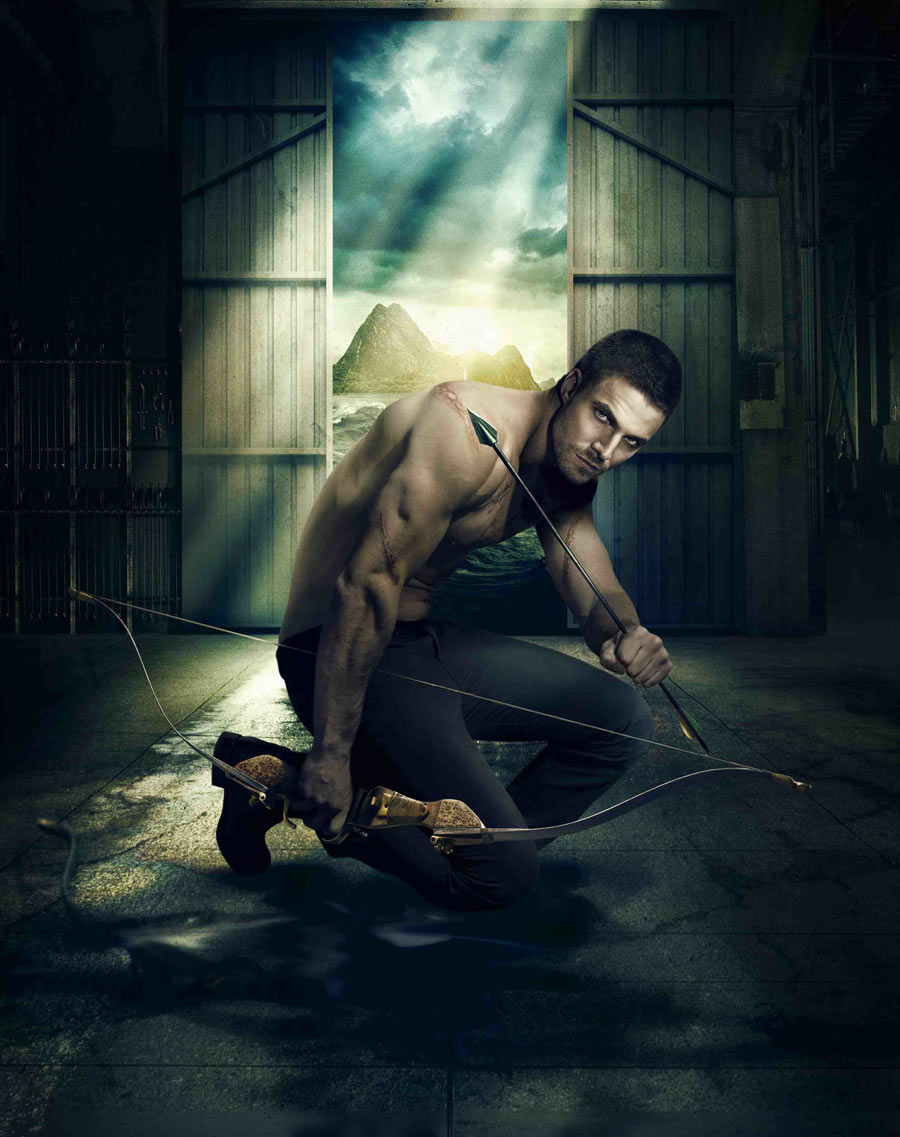 In this week's flashback chapter, Diggle remembers the dark days following his brother's murder and the destructive turn that his life took shortly after.

Posted by Scotty at 4:28 PM No comments:

Injustice is out!... for real this time

It's finally here everyone! Injustice: Gods Among Us is out today in the US for Xbox 360, PS3, and Wii U. I'll be picking up the game later today and, hopefully, the next time I post about it will be to write a review. I'll be trying to cover it as a fan of DC Comics, video games and, of course, Green Arrow.

Anyway, no more talk. Go pick up the game, show Green Arrow some love and lets show everyone online why he's the best character out there. #OurArrowsWillBlotOutTheSun
Posted by Scotty at 2:06 AM No comments: 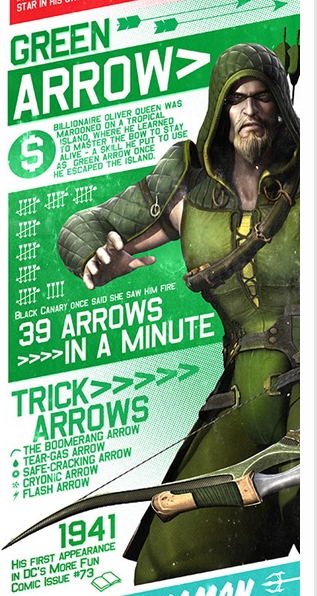 NetherRealm Studios released an infographic for the upcoming video game, Injustice: Gods Among Us. One infographic features a select group of heroes in the game. The other a select group of the game's villains. Both of them combine certain aspects of each group to create the ultimate hero/villain (see pic below). It's a fun little fact sheet and it's nice to see The Emerald Archer getting called out for being a top tier hero. Only a few more days until we can play as him for ourselves! 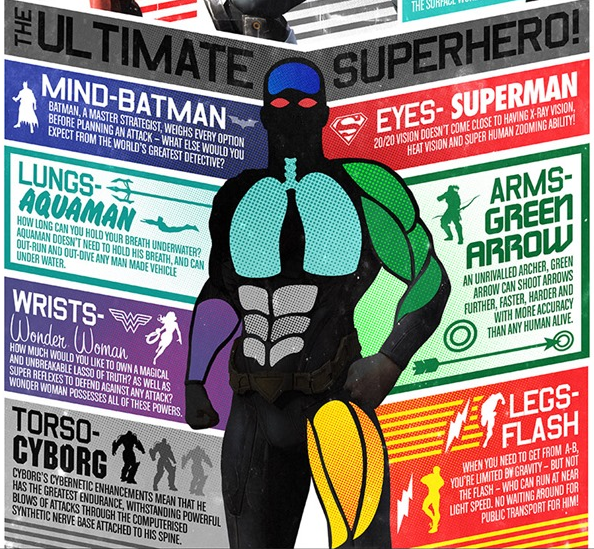 Posted by Scotty at 9:15 PM No comments: 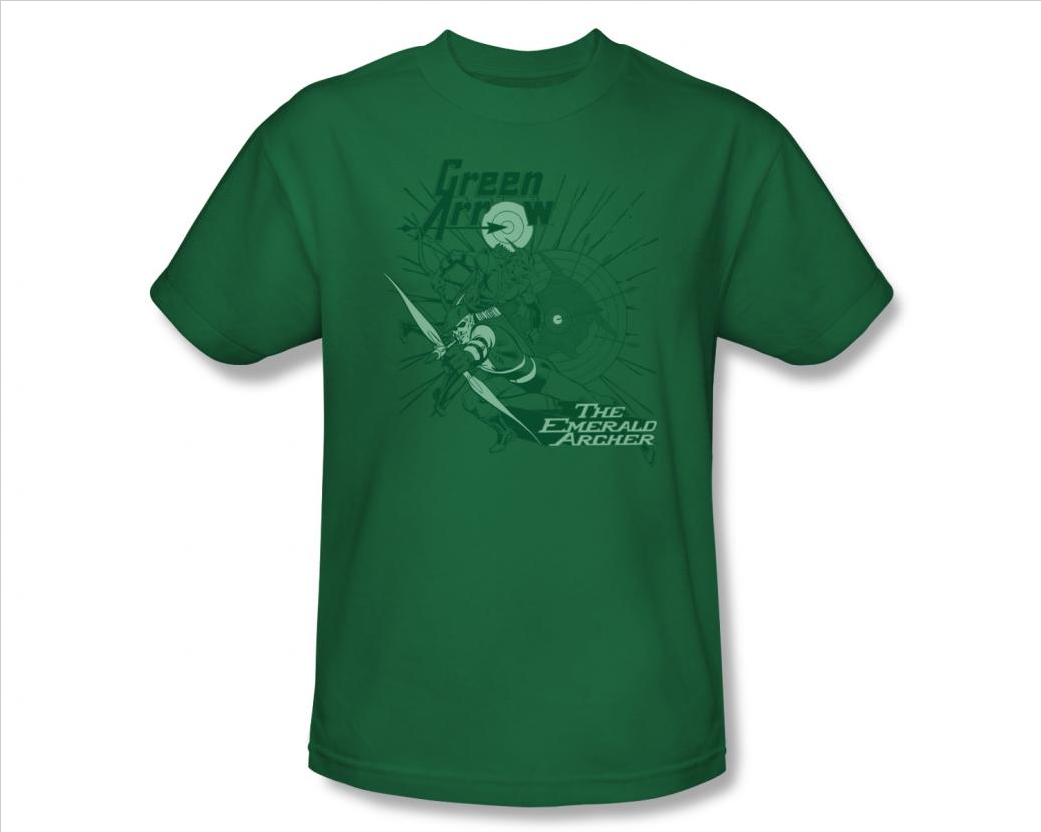 Another new addition to the ever growing catalogue of Green Arrow clothing. This one is pretty snazzy too, if I do say so myself. Obviously, it's inspired by one of Green Arrow's more classic designs, as opposed to his modern look. Usually, he's just in a standard pose so it has a little more going on than most of the other shirts I've found. Anyway, not too shabby. You can find this one over on Popfunk.
Posted by Scotty at 12:25 AM No comments:

Email ThisBlogThis!Share to TwitterShare to FacebookShare to Pinterest
Labels: Clothing

Well, it's that time again. DC Comics released their full slate of July solicitations today and, with it, comes our first look at what's coming up for the Emerald Archer. 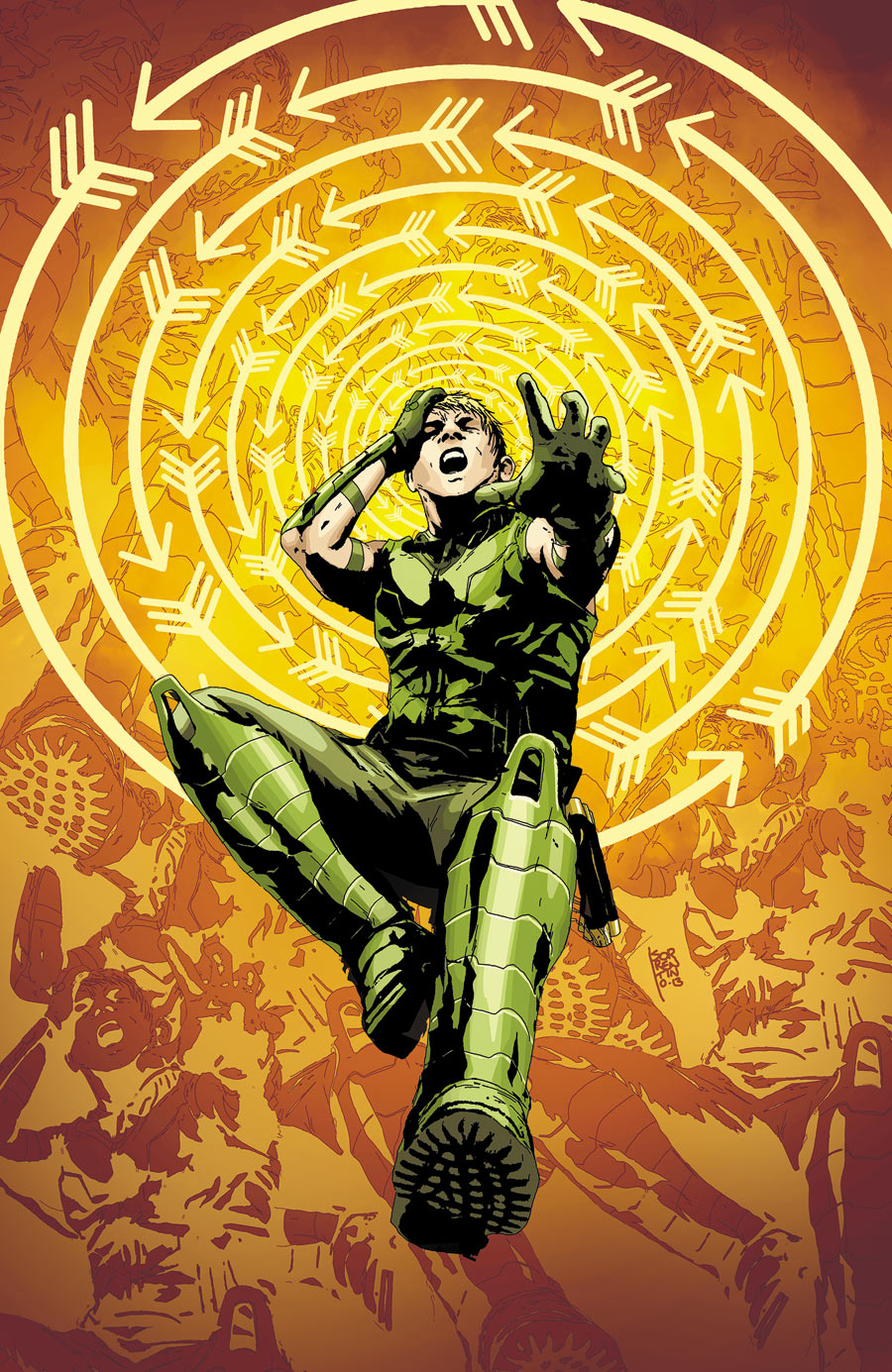 GREEN ARROW #22
Written by JEFF LEMIRE
Art and cover by ANDREA SORRENTINO
1:25 B&W Variant cover by ANDREA SORRENTINO
On sale JULY 3 • 32 pg, FC, $2.99 US • RATED T
Retailers: This issue will ship with two covers. Please see the order form for more information.
Count Vertigo makes his debut in The New 52! And just when Ollie thinks he’s got it all figured out, another piece of his family mystery emerges…only this one is still breathing! 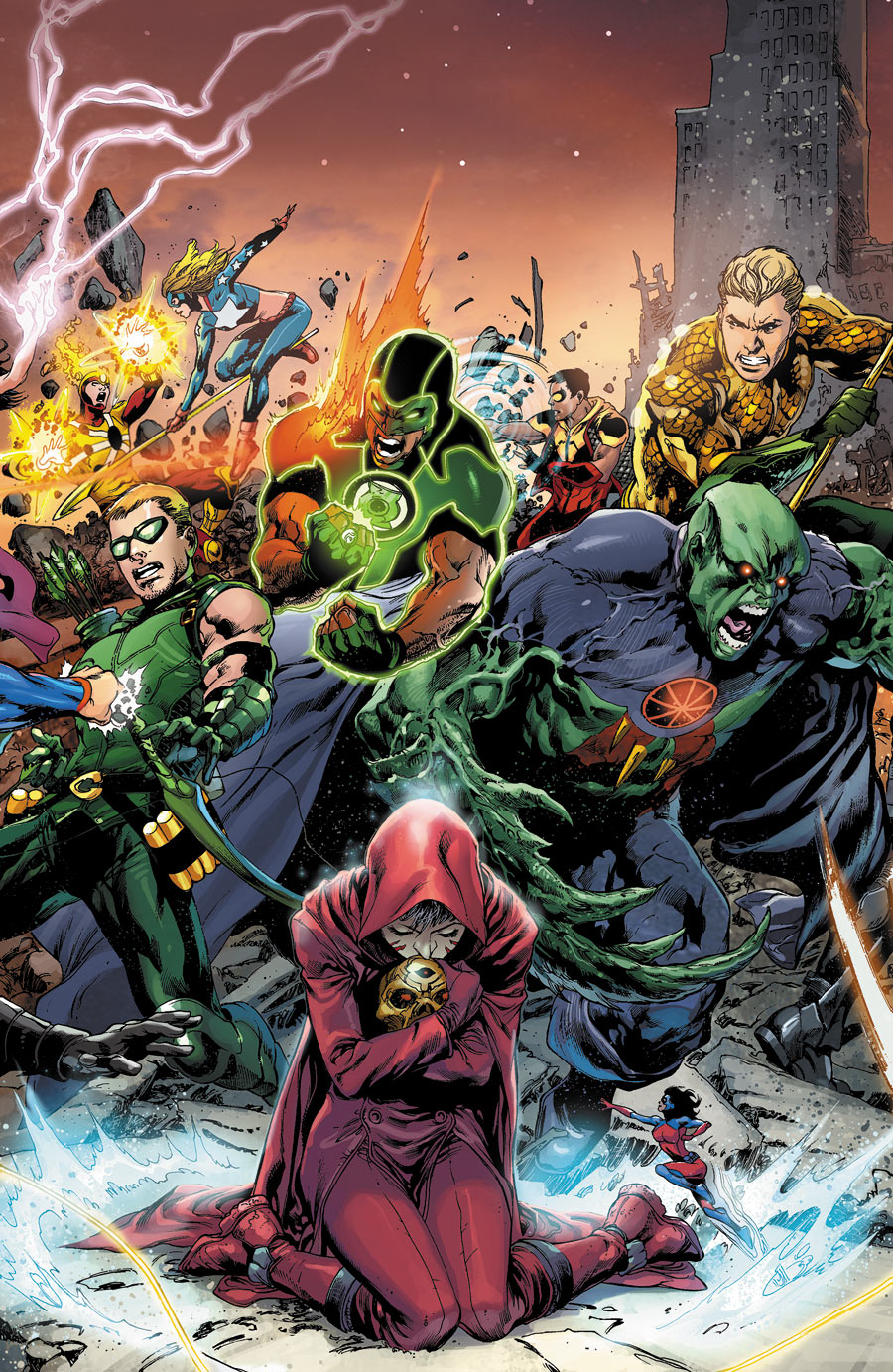 JUSTICE LEAGUE OF AMERICA #6
Written by GEOFF JOHNS and JEFF LEMIRE
Art by DOUG MAHNKE and CHRISTIAN ALAMY
Cover by IVAN REIS and JOE PRADO
1:25 Variant cover by BRETT BOOTH and NORM RAPMUND
1:00 B&W Variant cover by IVAN REIS and JOE PRADO
On sale JULY 10 • 32 pg, FC, $3.99 US • RATED T
Combo pack edition: $4.99 US
Retailers: This issue will ship with four covers. Please see the order form for more information.
TRINITY WAR CHAPTER 2! The War of the Justice Leagues continues as one hero is arrested and another goes rogue. Who is responsible for the evil that has infected the League? And who is the true killer? Only the Question knows the answer...
This issue is also offered as a combo pack edition with a redemption code for a digital download of this issue. 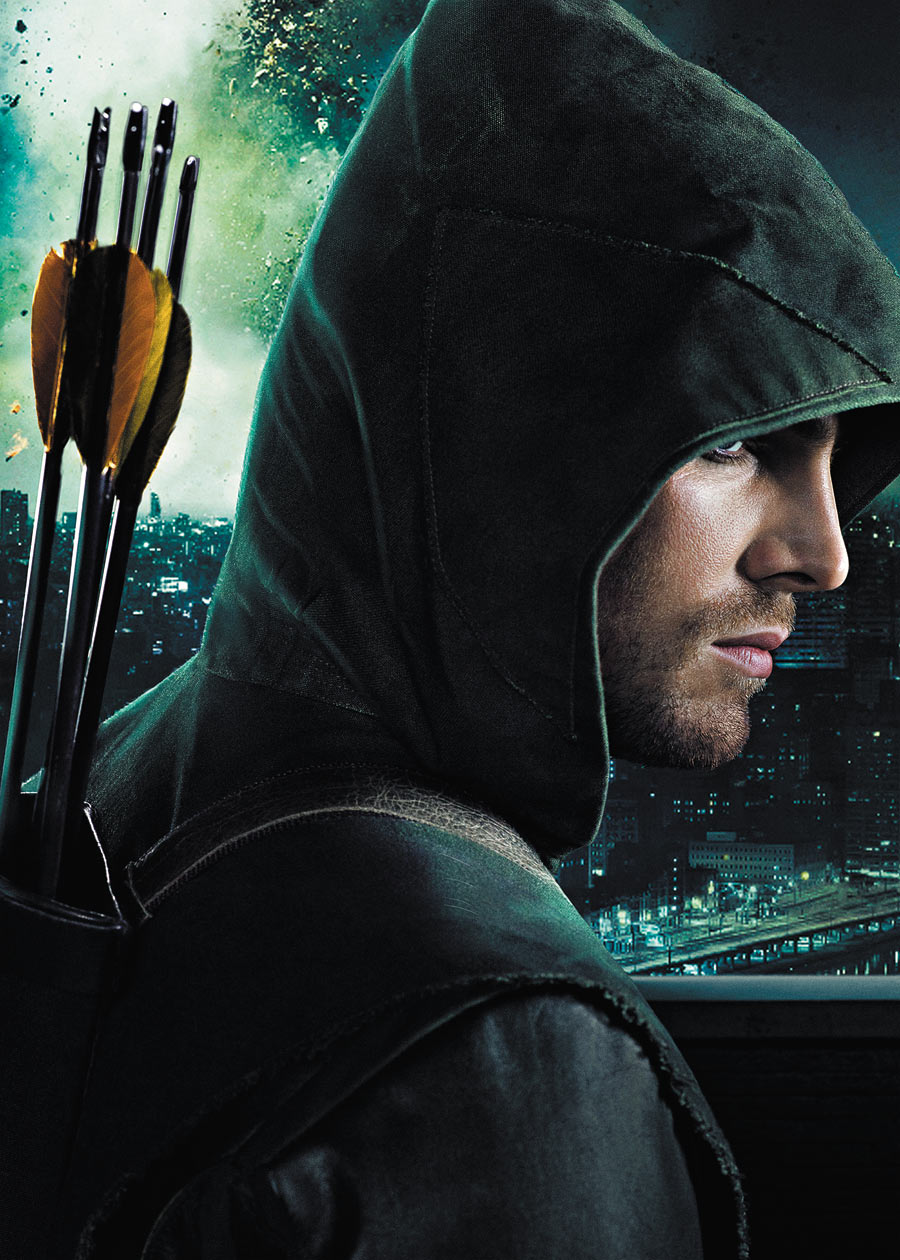 ARROW #9
Written by MARC GUGGENHEIM
Art by MIKE GRELL, ALLAN JEFFERSON, LEBEAU UNDERWOOD and ERIC NGUYEN
Photo cover
On sale JULY 24 • 40 pg, FC, $3.99 US • RATED T • DIGITAL FIRST
Does Diggle really trust Oliver? What happened between Laurel and Tommy while Oliver was presumed dead? What kind of tactics do the SCPD use in their ongoing investigation of the Starling City vigilante? Find out all this and more in this startling issue!

Looks like there's a lot of exciting things in store for Green Arrow! Count Vertigo is going to be making an appearance and more mysteries uncovered in the main series. Trinity War is starting that month and Ollie was called out as being a major player in the Justice League/of America/Dark crossover. Then of course we have the ever expanding mythology of the Arrow TV series being collected in Arrow #9. Yep, definitely lots to look forward too!

Posted by Scotty at 7:55 PM No comments: 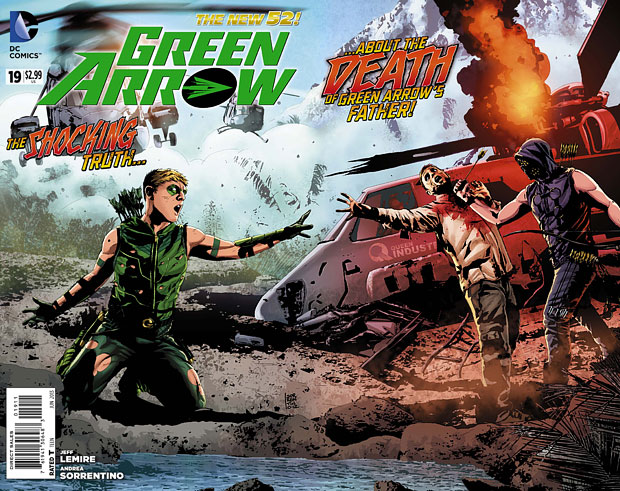 Three issues into The Kill Machine and the mysteries are still coming. We still need to know what’s Robert Queen’s connection to the island, who are the Outsiders, what is The Magus’s deal (seriously, this guy is starting to get a really creepy vibe), why is Komodo so hell bent on destroying Ollie, etc. I don’t mean any of that as a knock against the book. Personally, it’s a breath of fresh air for a title that’s been needing a clear direction since the New 52 reboot.

That said, if you’re hoping for a bunch of answers from this issue then you’re going to have to wait a little longer. This issue mainly focuses on hard hitting showdown between Green Arrow and Komodo after last issue’s cliffhanger. Andrea Sorrentino really knocks this whole issue out of the park. The action sequences are beautifully drawn and I still love those smaller panels that highlight important aspects of the art. Marcelo Maiolo’s colors continue to impress as well. I said it last issue and I’ll say it again, his colors add so much more depth and nuance than what we saw in issue 17. Really hope these two stick around and continue to grow.

We did get one revelation amidst all of the fighting. Komodo admits to killing Robert Queen. 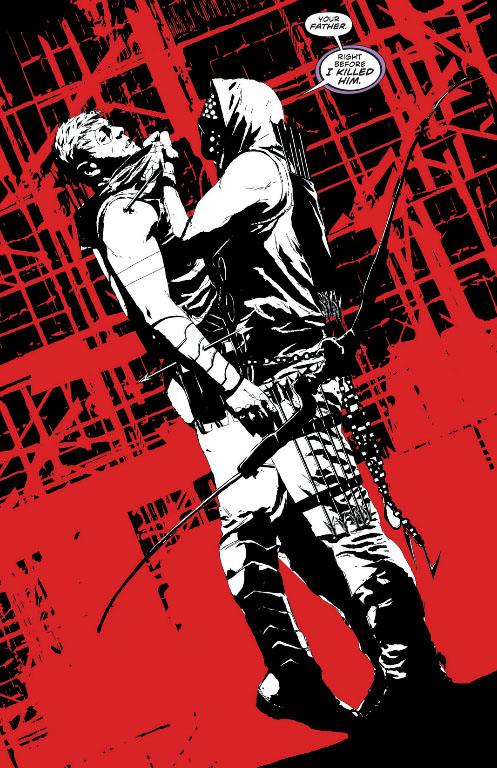 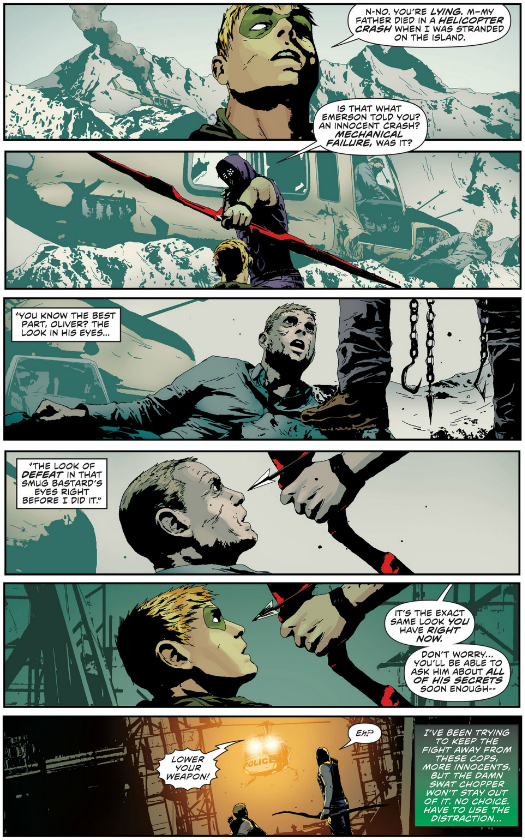 The cover kind of spoils this twist but it does bring up another question. If that is Komodo in the picture with Robert and Emerson that Ollie found last issue, then what happened to make him turn against two people he seemed to be friends with? Komodo seemed to have a real disdain for Robert when he was mocking Ollie about his death. So whatever it was, it must have turned personal at some point.

I did have one little complaint with this issue. Green Arrow seemed to get played down a LOT for the entire story. I can understand the villain berating the hero and mocking his skills but there are points when even Green Arrow is admitting to not being as good of a shot. He even gets shown up by a ten year old girl towards the end. It’s not a big problem and, truthfully, it’s probably just the fanboy in me not wanting to see his favorite hero get shown up by anyone.

All in all, it’s another solid issue. A nice break in the talking and world building of the previous two issues for a knock-down-drag-out fight if you will. Some of the preview art for issue 20 makes it look like we might be seeing more from the “now” timeline in the Black Mesa desert. Hopefully that means we’ll start piecing together some of these story threads and get into the meat of the story soon.
Posted by Scotty at 4:39 AM No comments:

Well this feels like it kind of came out of nowhere. I thought I was keeping up on all things Injustice and then, yesterday, I find out that they released an iOS version. I spent some time playing it and it's actually quite fun. The game is set up a little differently than the console versions. You play through a series of ladder battles with a group of three superheroes or villains that you can tag in at any time. Along the way, you'll earn booster cards to improve your team members' stats and coins that allow you to buy new characters.

It's a free download for anyone with an iOS device (iPhone, iPad, or iPod. No word on an Android version) so there's really no reason to not at least try it. Maybe you'll get lucky and Green Arrow will be part of your starting team. Then you won't have to spend all of your coins to get him like I did.
Posted by Scotty at 1:53 PM No comments:

Scotty
Just your friendly neighborhood comic nerd. Got inspired by some of the other DC character fansites out there (fan the flame and ride the wave!) and decided it might be fun to try and make a site for one of my all time favorite characters, Green Arrow.